The good practices in web development are evolving and improving constantly, and PSD to HTML conversion is the most preferred and favored way of modern website creation. Still, enhancement is always welcomed and this time it comes with Bootstrap. 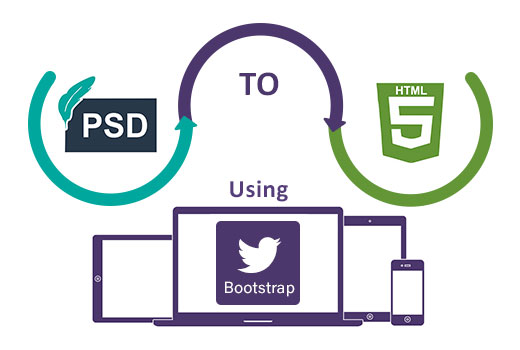 Introduction to PSD to HTML and Bootstrap

PSD to HTML conversion is the process in which a Photoshop document is converted into HTML and CSS code. As mobile users are the top internet ‘consumers’ PSD to HTML services are the most effective way to create a responsive mobile-friendly website. Using Bootstrap makes mobile web development even easier!

Bootstrap is a framework, created by a Twitter employee that is used in web development. It is mainly aimed at creating responsive websites that are flexible and include an awesome User Interface. If you ever considered hiring a Bootstrap developer maybe now is the perfect time because of the valuable advantages listed below!

Bootstrap makes our life easier as it allows us to use already-made HTML and CSS design templates so we don’t have to waste time by starting every new project from scratch. These templates can be applied in our navigation, buttons, forms, typography selection and other interface elements.

PSD to Bootstrap services improve the creation of dynamically responsive websites because they give us the best of the two worlds – graphic and web. Ever since it became open-source, using bootstrap became easier because the number of available resources increased drastically. PSD to HTML conversion will never be the same, as using Bootstrap includes a number of advantages that are not to be missed!

We could say that the web development industry changed when Google begun to prioritize responsive web design in 2015. Luckily, cross-browser compatibility is not such a daunting task anymore.

Using the available templates and layout classes will save you tons of time and the created websites will look awesome on various devices like desktop, tablets or smartphones. Create mobile-friendly websites that are compatible with all browsers!

As PSD to Bootstrap services are mobile-first, web developers are able to reconstruct any website for improved mobile User Experience.

The two available options are Flat-style and 2.0-er look. That way, enhanced User Experience is achieved fairly easy and it will be consistent on various screen sizes.

We said that Bootstrap lets us use already made templates but don’t worry – the created website is still fully customizable. In this manner web developers are able to build custom-made web pages according to the specifications of every project.

Additional features can be easily added at a later period and your custom Bootstrap version can be downloaded at any time.

Another advantage PSD to HTML conversion services is that with Bootstrap font icons are already built into the CSS. These icons are designed pretty nice and will surely look awesome on every device, browser and type of display (like Apple’s Retina displays).

5. Not a Problem for you

If you are an experienced web developer who has never used Bootstrap maybe you won’t need to hire a Bootstrap developer as it has a very helpful and friendly community.

This community involves more than 500 contributors and is constantly evolving. So, whatever problem you encounter – it’s quite possible that the solution might be found after just a couple of clicks.

6. Bunch of jQuery Effects are already there

Every modern website includes JavaScript/jQuery functionalities in it. Fortunately enough, Bootstrap already includes a wide range of jQuery effects that will polish every website.

This jQuery variety includes various visual effects like sliders, hovers, rollovers, accordions, tooltips, alerts or modal windows that are all very easy to implement. On the other hand, the writing scripts can be left out absolutely.

Image scaling is much easier because Bootstrap uses a Fluid Grid feature that includes a 12 Column Grid which facilitates the usage of responsive features, as well as nested elements and upholds offset.

Fortunately enough, the framework supports a number of image modes, like CMYK, RGB, Lab, Bitmap, Indexed color, Duotone and Grayscale that will save us a lot of time when dealing with images.

All those nervous situations that used to be normal for a common web development process will be minimized to a great extent. Using Bootstrap will make the whole creation course much easier and faster because the needed HTML base is already done. You won’t have to code from scratch and this will save you a lot of time.

9. Do Not Need to Worry About CSS

Writing CSS code is not such a difficult task, but when excellence is required, it takes a huge amount of time. In this aspect, we want to mention that all CSS-related problems remain in the past with Bootstrap.

Using the pre-defined CSS LESS/Sass code will save you a huge amount of time as creating a responsive website is much easier and less time-consuming. As we said Bootstrap is customizable and you can simply tick off any CSS elements that you do not need or add any existing CSS code.

Originally built by a developer from Twitter, Bootstrap incorporates HTML, CSS and JavaScript features, thus making it the favored web development tool nowadays. Bootstrap lets you create a beautiful responsive website that is full of dynamic features. Quality PSD to HTML Conversion has never been so easy, because Bootstrap allows you to use the potential of a PSD file more!

As we saw in the article switching to Bootstrap has its benefits in terms of responsiveness, development speed, customization and effort needed. So in short – hire a Bootstrap developer, focus on mobile users and don’t live in the past!

In general practice, a watermark is added to a document in order to prevent counterfeiting. It can be text or an image across the document or at a defined location. Opacity of watermark can be adjusted in accordance to the fact as how a watermark can affect visual appearance of document or if you want — Read More —

Do you want to migrate multiple PST files from Outlook PST to mailbox Exchange Server and want to know a trustworthy method? Then, in this blog we will sort out this query. On one hand, Outlook is an email platform, which is used for the cross-communication between the organizations. It stores the data in a — Read More —

These days we’re exposed to a huge amount of fantastic visual content. From 3D graphics to augmented reality, it can often seem like, visually, there’s nothing left that will surprise or excite us. However there is still one type of visual affect so extraordinary that even when you see it with your own eyes, you — Read More —